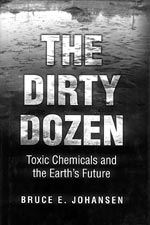 "The chemical industry has put all of us in its experimental beaker", says the author, referring to the twelve most deadly chemicals known to humankind. Persistent organic pollutants (pops), as they are called, have either been banned or are being phased out throughout the world. This book deals with various aspects of pops, right from the history of their production to the threats they pose to the future.

The book describes the "grass-hopper effect" by which these chemicals jump around the world, evaporating in warm conditions and then settling in cool spots. It particularly documents the case of the Inuit community: many Inuit have levels of pops in their body five to 10 times greater than the national average in Canada or the us.

A chapter links chlorofluorocarbons with the ozone hole. It is common for industrialised countries to export toxic chemicals to poor nations: Third World countries are havens for "gift waste". Human health effects occupy another chapter. But pops affect not only human beings. This book looks at the impact on polar bear, Alaskan reindeer, Beluga whales, fish and frog, vultures and bald eagles. In the end, the author discusses public policy issues -- the Stockholm Convention on Persistent Organic Pollutants, companies paying for cleanup, taxation and regulations governing toxic chemicals.