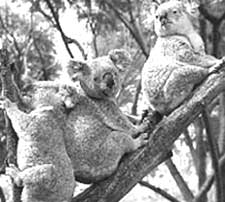 as the koala (a marsupial resembling a small bear) population surges ahead, desperate measures are being called for. The latest one includes contraception where the male koalas will be given vasectomies and females provided with hormone implantations to stop them from ovulating. The three-year trial is to start this month in Victoria where there are as much as eight to 10 koalas per hectare.

With the state government ruling out a cull, "the only humane alternative is contraception," according to Robert Begg of the department of natural resources and environment. There are, however, several hitches. Finding dominant koala males to give them vasectomy will be a difficult task. And missing even one such koala could mean that it could fertilise all the females!

The koala's preference for leaves from the manna gum eucalyptus tree and the fact that southern koalas cannot be transported to the northern states due to warm climate has compounded problems for the Victorian government.