CHRONIC diabetics are at a greater risk of kidney problems. As the kidneys overwork to filter high blood sugar, its filtering system gets damaged, eventually leaking blood proteins into urine. Poor filtration also pushes the blood pressure up. Doctors usually recommend ACE inhibitors, available under trade names of capton and accupril, to lower the protein loss through urine, while controlling the blood pressure.

The inhibitors do not completely fix the problem. “The kidney problems still persist in some patients,” said Anoop Misra, director of the department of diabetics in Fortis Hospital in Delhi. The problem can be identified by regular testing for presence of high protein levels in urine, called albuminuria. 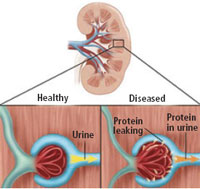 Dutch researchers recently tried to get around the problem with the help of a 2008 study on animals. The study showed paricalcitol, a drug that controls calcium absorption in the body, helps lower albuminuria. The researchers, led by Dick de Zeeuw of University Medical Centre Groningen, examined the efficacy of paricalcitol on diabetics being treated with ACE inhibitors.

Unlike ACE inhibitors, the adjunctive treatment was helpful for even those whose sodium or salt intake was high, he said. Since adhering to low-sodium diet is difficult, paricalcitol could be useful for kidney protection in the large number of people with type 2 diabetes, the authors noted in The Lancet on November 3.

Misra said the study, funded by pharma company Abbott, is too specific. Long-term studies on people in different countries are needed to draw a definite conclusion. Indians, for example, have different metabolism and calcium absorption capacity than the Dutch, Misra said. His colleague at Fortis Hospital, Suchee Madhusudan, said more studies are needed as paracalcitol can raise calcium and phosphorous levels in blood, causing bone disease.