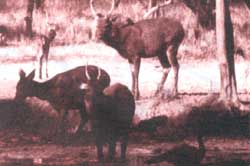 The Delhi High Court (DHC) has recently been informed by the Centre that it "is examining" the bifurcation of the Union ministry of environment and forests (MEF). This development came about after a committee appointed by the DHC on wildlife preservation, protection and laws, made its recomendations to the court.

The committee pointed out that the post-Rio scenario warranted a ministry for natural resources (forests and wildlife), for wildlife management and protection". This is deemed necessary as the MEF dedicated a large portion of its administrative time and finances evaluating largescale industrial, hydroelectric, thermal power, mining and other sectors. It added that the PAS be increased to 7.5 per cent of the country, from the present 4.3 per cent.

'Strongly endorsing' the suggestion that a ra'dius of 25 km around protected areas (PA) be declared 'no development zones', the Centre has, however, pleaded its inability to remove or relocate industries that have come up even within a five-km radius, besides imposing a blanket ban on development activities, once an area had been denotified.

The committee, comprising the present inspector general of forests (IGF), a former additional IGF, environmentalists and advocates, had come down heavily on the issue of denotification.

"The current perceivable threat to Protected 'Areas (PA) arise from the sheer bullish power of denotification which the legislature wields over these areas," the committee noted. "The power is so immense that if not properly exercised, it may lead to unregulated denotification Of PAS not based on any scientific and researched studies, but on political and industrial contingencies," it said. The committee suggested that committees be formed in each state, which would look into every application to denotify a PA.

These committees, it was recommended, would comprise the local member of the legislative assembly, a member of Parliament, the additional inspector general (wildlife), chief wildlife warden of the state concerned, and two reputed environmental scientists nominated by the Centre.

Senior officials of the MEF who are involved with the committee, however, refrained from making any comments ;on the recommendations or the i Centre's response in court, stating they were awaiting DHc directives.

Regarding the issue of peoples representation in PAS, the committee suggested the formation of an advisory council comprising village representatives1panchayats, who could participate in the management and protection of the denotified area.

"A long-term compensation scheme has to be immediately initiated for all resettlement / relocation from forests," the committee recommended. In the recommendations former additional IGF, S Deb Roy, said that "NGOs are now putting pressure on the government of India to amend the Indian Wildlife (Protection) Act to allow human use in national parks also. This will be disastrous for wildlife and hence should not be allowed under any pretext".

Valmik Thapar of the Ranthambhore Foundation, who is a member of the committee appointed by the DHC, criticised the Centre's stance on handling the 'no development zones'. "While they (the Centre) acknowledge that these are ecologically sensitive areas, many proposals have been granted within these areas. Though closure would certainly endanger jobs, granting fresh permission is just not done," he stated.