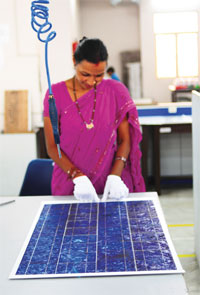 Finance minister Arun Jaitley’s proposal of customs and excise duty exemptions on various raw materials used in renewable energy products has brought some relief to the ailing domestic industry, especially domestic solar industry, which has long been demanding these exemptions. Though the difference in product cost may not be much, but the industry has welcomed the move as it will help them get closer to level playing field with international players.

“It is definitely a welcome step,” said Bhupesh Trivedi, president (marketing) of Waaree Energies Ltd, which manufactures solar panels. “The domestic industry has been asking for these exemptions among other things to be able to compete with international players. China’s products are cheaper because of subsidies and exemptions given by the government to domestic industry. We also need support to become competitive,” said Trivedi. He, however, added that these exemptions will bring down the cost of panels by 2-3 per cent only as these raw materials do not make a major part of the panels. Agreeing with Trivedi, Pradeep Kheruka, vice chairperson of Gujarat Borosil Works Ltd, said, “Duty exemptions on solar tempered glass will bring down the product cost by about 3 to 4 per cent.” Overall, domestic solar industry expects the price of solar panels to reduce by 4 to 4.5 per cent.

The domestic solar industry is awaiting imposition of anti-dumping duties by finance ministry on imported solar cells which make a major part of the panel. On May 22, this year, the commerce ministry recommended imposing anti-dumping duty of US $0.11 to US $0.81 per watt on solar cells imported from China, US, Taiwan and Malaysia. The duties are yet to be notified. “The government has taken the step in the right direction, if the duties also come through, we will get the long-awaited level playing field with international players,” said Trivedi.

Similarly for wind energy sector, Jaitley proposed to reduce the basic customs duty on forged steel rings used in the manufacture of bearings of wind operated electricity generators from 10 per cent to 5 per cent. Special additional duty of 4 per cent on parts and raw materials required for the manufacture of wind-operated generators has also been exempted.

In the electronics sector, domestic TV manufacturing sector has been given special attention. Jaitley proposed exemption on basic customs duty on colour picture tubes used to make cathode ray TVs, which are generally used by economically weaker sections who cannot afford to buy more expensive flat panel TVs. “The duty concession will help revive manufacturing of TVs in the Small and Medium Enterprise sector and create employment opportunities,” he said. At the same time, to encourage production of LCD and LED TVs below 19 inches in India, Jaitley proposed to reduce the basic customs duty on LCD and LED TV panels from 10 per cent to zero. Th exemptions are expected to reduce the price of flat screen TV by Rs 300-350, and that of cathode ray TV by Rs 150-300.