Herbicides are the culprits 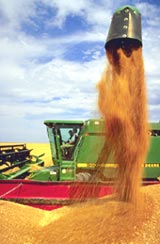 a study conducted in the wheat growing regions of the us indicates that use of herbicides like 2,4-dichlorophenoxyacetic acid and 4-chloro-2-methylphenoxyacetic acid can lead to malformation among newborns. These herbicides are widely used for weed control in parks and farms. In the past they have been linked with an increased rate of cancer.

The study compared the incidence of malformation in areas with more as well as less acreage under wheat. More than 85 per cent of the acreage in both the areas is treated with the herbicides and the amount used for spring and summer crop is about 0.3-0.4 pounds per 0.4 hectares. Information about newborns and infants for 1995-1997 was obtained from the National Centre for Health Statistics, Maryland. It was assumed that the place of birth was where the newborns were conceived and where the mothers lived during pregnancy.

The number of births during 1995-1997 in the selected areas was 43,634, out of which seven per cent kids were found to be premature, 4.7 per cent weighed less than normal and 1.9 per cent were malformed. Significant increases in malformation were seen in the circulatory, respiratory, muscular and skeletal systems. Infants conceived between April and June every year (when the herbicide is generally applied) had an increased chance of being malformed as compared to those conceived during other months.