Born with a map

Chinook salmons have an innate sense of direction, based on the earth’s magnetic field 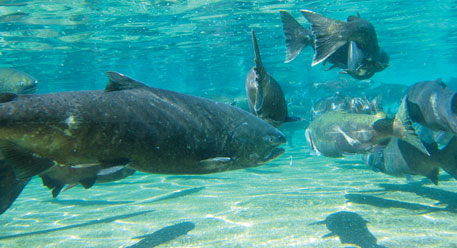 THE Chinook salmon is a marine fish that hatches in freshwater. It then migrates to specific feeding habitats thousands of kilometres away in the sea in the first year of its life, spendsÃ”Ã‡Ãªyears hunting for food, returnsÃ”Ã‡Ãªto the freshwater region where it was born to spawn, and dies after the breeding season. How does it find its way around had been a mystery.

A lot of animals and birds use the magnetic field of the earth to track migratory routes, but they first travel with other animals of their kind to learn and internalise the route. What is special about the Chinook salmon (Oncorhynchus tshawytscha) is the fact that they inherit this directional sense, say researchers from Oregon State University, US.

The researchers say regions in oceans are delineated by combinations of magnetic intensity and inclination angle (the angle at which field lines intersect the earth’s surface). The Chinook salmon use the combination of magnetic intensity and inclination angle to assess their geographic location. The researchers call this navigation system an “inherited magnetic map” as it provides the fish with data about their location and guides them to foraging areas and ancestral spawn locations. The map does not require the fish to learn the gradient in earth’s magnetic field. The scientists say this magnetic map is also found in hatchling loggerhead sea turtles from Florida, US, and could be present in several other marine animals.

To test their hypothesis, the researchers put juvenile Chinook salmons in water tanks fitted with a magnetic coil system that created magnetic fields similar to those found in their typical oceanic range. The fish exposed to the northern magnetic field were expected to orient approximately southward, and those exposed to the southern magnetic field were expected to orient approximately northward, in line with the inherited migratory route. As expected, the fish tested in the northern field oriented south to southwest, and those tested in southern field oriented north to northeast, proving the existence of an inherited magnetic map.

“What is particularly exciting about these experiments is that the fish we tested had never left the hatchery and thus we know that their responses were not learned or based on experience, but rather they were inherited,” says lead author of the study Nathan Putman, a postdoctoral researcher at Oregon State University. “These fish are programmed to know what to do before they ever reach the ocean,” he adds. Putman says it is likely that the magnetic field is not the only tool used for navigation.

Other elements, such as the sun and the sense of smell, could also be behind the salmon’s navigation skills. The study was published in the February 6 issue of Current Biology.

T Balasubramanian, former director and dean of the Department of Marine Biology, Annamalai University, Tamil Nadu, says such studies should be carried out in eel fish groups and marine turtles in regions like the Andaman islands where tsunamis have had a very strong influence on the magnetic field. “We also need to identify the genes responsible for fish migration in the marine environment,” he adds