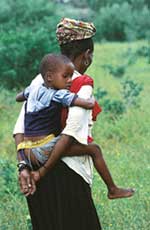 Botswana's autochthonous Bushmen (or the San people) have won legal rights to return to their ancestral homeland in the Central Kalahari Game Reserve, after the High Court of Botswana ruled against their eviction by the government. Following the eviction, the Bushmen had been living in resettlement camps just outside the reserve.

The high court condemned the government for wrongfully evicting the Bushmen from their ancestral homeland in 2002 in a judgment passed on December 13, 2006. The bench said that the government had acted "unconstitutionally" and "unlawfully" by a two-to-one majority. Taking an even harder line, it said the refusal to issue hunting licences to the San was "tantamount to condemning the remaining residents of the Central Kalahari Game Reserve to death by starvation". The government's refusal to allow the Bushmen to return to their land, too, was "unlawful and unconstitutional," the judgement noted.The court, however, did not compel the government to provide services such as water to any Bushmen who returned to the reserve.

Following the verdict, more than 1,000 Bushmen have started returning to the reserve, one of Africa's largest protected forest reserves.

The reserve was created in 1961, during the last days of British colonial rule, to protect the traditional territory of the Bushmen, then numbering approximately 5,000. Traditionally Bushmen are hunters and gatherers, and have lived in southern Africa for more than 22,000 years. However, the Botswana government started evicting the Bushmen in 1997, notwithstanding the national constitution, which guarantees the tribal community the right to live there in perpetuity.

The government says it is too costly to provide them basic facilities like medical care and schooling, despite the reserve earning tourism revenues. The government further banned hunting in the reserve and said that the Bushmen threaten the reserve's ecology. The Bushmen's representative body, the First People of Kalahari, and other supporting groups, however, claim that the government intends to clear the area for the lucrative tourist trade and diamond mining.