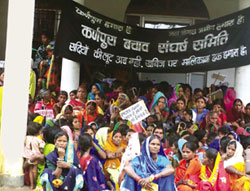 Essar Steel is working on a special resettlement and rehabilitation (r&r) package for its proposed 6 million tonne steel plant in Chaibasa in Jharkhand. The proposed Rs 1,200-crore project will require about 1,012 hectare (ha) of land, mostly to be acquired from tribal marginal farmers. It will require displacement of two villages -- a total of about 100 families -- and land from eight other villages.

Essar has plans to relocate tribal villages, keeping in mind that villagers' socio-cultural fabric is not affected; along with jobs and sustainable income options for them. Although informal negotiations are on, no land transactions have taken place. Tribal leaders and land rights activists are sceptical of the proposal and assert that new industries should not be allowed to come in until previous disputes are resolved.
The company's r&r package, framed in collaboration with the Xavier Institute of Social Science, Ranchi, works on the premise that project-affected people should be able to continue their life the same way as before. Jayant Jaipal Singh, Essar's general manager for corporate affairs in Jharkhand and the son of a noted tribal leader, says: "A tribal can't just go to another tribal village, buy land and settle happily. Owning land doesn't necessarily gain him acceptance in the new village, which is why villages in their entirety should be shifted as they are." Singh has been instrumental in formulating the package.

The proposal estimates that apart from money for their land, each household, including landless farmers' families, will get 0.12 ha of land in the new village. Out of this, 0.2 ha will be used for a homestead and domestic animal shed and 0.1 ha for backyard cultivation. The new villages will be part of the larger steel township so that villagers have access to urban facilities with the assurance that the "company doesn't forget about them". Essar officials are talking to government officials to ensure that the new villages are recognised officially and granted all legal rights of a tribal village.

The proposal also talks of giving villagers 10 per cent of the land price upfront and putting the rest in fixed deposits, which they will have access to after five years -- a move to encourage saving. The maximum landholding of most tribal families is about 1 ha, so cash compensation (Rs 1.3 lakh per 0.4 ha for paddy fields and less than that for non-cultivable land, according to state guidelines) isn't enough to sustain a family over a long period of time.

The company, however, is not promising jobs for all. "We will give people training and if they prove capable, we'll give them employment," said Singh. "But I'm pretty pessimistic about that because, given the level of education, only 10 per cent perhaps, will qualify. That's why we don't promise jobs, we promise income. We will show them how to earn an income," he added.

To secure livelihoods, Essar aims to adopt Jharkhand's Krishi Vigyan Kendra's model of backyard commercial cultivation. This may include commercial vegetable cultivation or poultry, piggery or milch cattle with stall-feeding facilities. Villagers will also have the option of pooling land and forming a larger cooperative farm, with Essar to train them in modern farming methods, besides bearing all costs. For youth with graduate or post-graduate degrees, there will be job options at township schools, health centres, shopping complexes or in the company's ancillary units.

According to Singh, Chaibasa villagers are divided about giving up their land for the plant. While the youth want the plant the older lot is apprehensive, he says. Local groups, however, deny that such a division exists and say that everyone is totally opposed to the plant. Although Essar officials claim they will go ahead only when villagers accept the proposal, land tribal rights activists remain unconvinced.

"Only if villagers feel they will benefit from the plant, the plant should be allowed and presently, villagers don't feel that way," said Sreerat Kachhap of the Bindrai Institute for Research, Study and Action. Kachhap also said the state and industries would have to win back people's trust by first settling old accounts where industries have wronged tribals.

While essar hopes to get the green signal for land transfer by September end, villagers remain unsure about the offer. Based on past incidents with industries and unkept promises, their fears are not unfounded.