BPL: a difficult line to draw 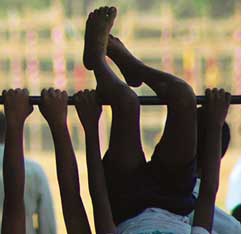 How to determine who is poor? A new method

a central committee recently proposed to the rural development ministry a three-tier system to identify people living below poverty line (bpl) in villages. The system, which includes divisions on caste and religion, aims to include the "poorest and the most vulnerable" and exclude a few (see box). The committee has also proposed to award points to those who do not belong to either of the categories to decide if they make it to the bpl list.

In case of conflict in points, the final say would vest with the panchayats or gram sabhas. The committee also said it was important to estimate poverty afresh for benefits to all.

India follows the Planning Commission's poverty estimation of 2004-05, according to which the percentage of poor in rural areas is 28.3.The committee recommended that the poverty estimate should be "drastically revised upwards to at least 50 per cent." These estimates determine financial allocations for targeted poverty alleviation programmes.

Economist Jean Dreze said any scoring method, however well devised, was bound to involve exclusion errors. "Scoring methods should be avoided if at all possible," he said. The approach of first fixing poverty estimate and then identifying people who fall in that bracket is a problem, he said, because it leads to the imposition of caps on the bpl list at different levels. This might lead to unfair exclusion of several households and bitter conflicts in the allocation of bpl cards, he added.

It is a hypothetical method and has not been tested on the ground, said Himanshu, assistant professor of economics at the Jawaharlal Nehru University in Delhi. "No pilot project has been carried out to see the efficacy of such a proposal. If this fails the exercise would be a wasteful expenditure," he said.

The proposals are a definite improvement from the previous years, said Nikhil Dey of the Mazdoor Kisan Shakti Sangathan in Rajasthan. "But conducting surveys and classifying people will have problems. Even if the rural development ministry accepts the proposals, they would still need clearance of other associated ministries such as food and agriculture," he added.

Earlier, the rural development ministry identified bpl based on income in the 1992 census, expenditure in the 1997 census, and socio-economic indicators like land holdings, sanitation, type of housing and means of livelihood in 2002. The current proposals are for the 11th Five Year Plan (2007-2012).

The committee though is hopeful. "Unlike other censuses, the mechanism we have proposed will not disincentivize rural families from accessing benefits for the fear of being excluded from the bpl list," said N C Saxena, Supreme Court-appointed food commissioner and the head of the committee. "If the proposals are accepted those who were left out earlier will make it to the list," Saxena said.