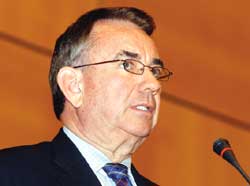 The g7 has decided to establish a "bioterrorism crisis centre" and provide millions of shots to the World Health Organisation's international "vaccine bank" to counter any germ weapon attack by terrorists in future. g7 health ministers said on December 10, 2004, that the crisis centre will also help manage epidemics like a bird flu outbreak. It will be headquartered in Ottawa. British health secretary John Reid said the vaccine bank will help any country in need.

"Despite our efforts, we have to admit that 'they' [terrorists] can still hit us at any moment," us health secretary Tommy Thompson was quoted as saying. The us has committed to provide 80 million doses of smallpox vaccine to the vaccine bank. The uk, France, Germany and Canada have also made allotments to the bank.