US to face crisis with the scientific workforce dwindling in future 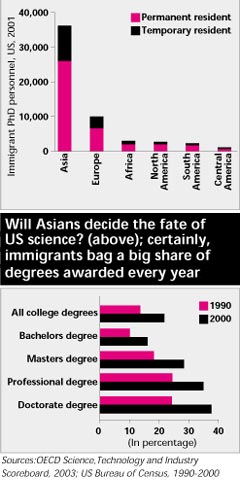 an impending shortage of science and engineering (s&e) personnel in the us has forced the country to look inward for talent. The country, which is the biggest beneficiary of brain drain in the post-world war ii era, has recently admitted that 'imported brains' will not be easy to lure in the near future, as they are in demand in their own countries and elsewhere. "Historically, the us has benefitted from both an abundant supply of indigenous talent and the contributions of scientists, engineers and graduate students from other countries...analysis of current trends, however, indicate that serious problems lie ahead, which may threaten our long-term prosperity and national security," states a report of the National Science Board (nsb), the policymaking arm of the us National Science Foundation.

The board sounded the warning note about future trends after the immigrant s&e workforce in the us touched an all-time high in 2000. According to the nsb report released on November 19, 2003, the percentage of foreign-born bachelors, masters and doctoral degree holders in 2000 was 17, 29 and 38 respectively. The numbers have been increasing over the years. In the 1970s, the number of immigrant doctoral degree holders was 10 per cent, but in 1990s it was 20 per cent. The majority of the phd immigrants are Asians -- according to a letter that appeared in the Science journal in 2002, foreign scholars from four countries -- China, Taiwan, India and South Korea -- accounted for 60 per cent of the doctorate degrees awarded to non-naturally born citizens of the us during the 1990s.

The trend, however, may soon reverse. Nations like Taiwan and Ireland, which are growing at much faster rates than most developed nations, have been successful in enticing their scientists and engineers to return after training abroad. Since 1992, China has been pursuing a policy of supporting the studies of its scientists abroad, and encouraging them to return with the promise of free movement in and out of the country.

If such policies succeed, then the present dependence of the us on foreign-born scientists is bound to spell doom for it. This will be especially true with the younger generation in the us showing less interest in s&e. Another worrying factor is the large-scale retirement of the s&e workforce of the country in the next two decades. Moreover, the us Bureau of Labour Standards predicts that between 2000 and 2010, s&e-related occupations in the us will grow by 47 per cent, compared to the 15 per cent increase for all occupations as a whole.

To avoid a future crisis, nsb has asked the government to encourage the youths, particularly from the underprivileged sections of the society, to opt for s&e courses.