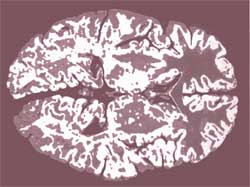 PREVIOUS studies have shown that the human brain is efficient at using different portions of itself to perform different tasks. Interestingly, there is evidence from neuropsychology that localisation of brain's functions goes further. Thad Polk and Martha Farah of the University of Pennsylvania, us, have built a thesis around the assertion that the stimuli that are processed by different regions of the brain tend to occur in a composite fashion in space or time (Proceedings of the us National Academy of Sciences, Vol 92, 1995).

It means that if your eyes light upon a letter, the chances are high that the following symbol will also be a letter, and the same for digits. It is only rarely that letters and digits tend to cohabit with one another in a scrambled manner. Similarly, a musical note or a vocal-isation in one language is heard in con-junction with another note or a second vocalisation in the same language.

The processing of visual stimuli provided by letters and digits, or by music versus other sounds, or by cursive writing versus print, seems to occupy different regions of the brain. Also, in people who are fluent in more than one language, different cortical regions seem to handle each language.

The localisation of brain's functions had earlier been ascribed to genetic tendencies working according to the distinctness of the functions themselves. The puzzling fact is that the categories that are being discriminated in such a fashion -- that is, are being handled by different subsets of nerve cells -- have arisen too recently in evolutionary terms to be explained by genetic studies.

Therefore, these localisations must be entirely due to differences in the way the brain gets wired during development. But how could such differences arise? After all, letters and digits form roughly similar shapes and some letters resemble digits more than they resemble other letters (think of 'O' and 'zero' as they are written).

Statistically speaking, we are dealing with stimuli that are highly correlated. Almost 50 years ago, a distinguished neuropsychologist, D O Hebb, proposed that a sensible way for ordered patterns of connections to arise during the development of the nervous system would be for nerve cells to learn on the job. Known as 'Hebbian learning,' the postulated mechanism ivolves strengthening the connections between two units whenever they are simultaneously active. On the contrary, if only one of the two is active at the same time, the connections are weakened. Obviously, this mechanism enables the output from correlated units to be reinforced.

The computer experiments that Polk and Farah carried out, used layers of simulated neurons for the input and output. One can assume that the input and output neurons stood for the eye and the brain respectively. An extra assumption that they needed to make was that within the output layer (brain), connections between nearby neurons were excitatory, whereas, connections between neurons that were relatively far off, were inhibitory. Interestingly, this latter assumption, called 'short-range excitation and long-range inhibition' in the scientific jargon, is often ascribed to problems concerning the spontaneous formation of spatially localised structures or patterns.

Similarly, connections between input and output neurons were assigned at random to begin with and a Hebbian learning rule was used to update con-nections after every cycle of learning, that is, after every presentation of a stimulus or equal pairs of stimuli. After as few as five cycles, excitatory neurons in the output area were found in distinct clusters for each kind of input. As the authors conclude, "simple and familiar properties of self-organising systems... will lead to spatial localisation for arbitrary stimulus categories".