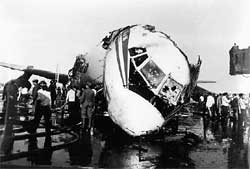 even with the help of a flight data recorder (fdr), commonly known as a black box, it might be difficult to find out why an aircraft crashed. As the existing fdrs do not register all the information that investigators might need, the us federal aviation administration is now considering whether airlines should be forced to install a new generation of fdrs.The refit could cost us operators up to $1.6 billion, some observers say.

But Marcello Napolitano, an associate professor of mechanical and aerospace engineering at West Virginia University in Morgantown, us, may have found an alternative. He has devised a 'virtual fdr' neural network that can learn how to use the conventional fdr data to deduce the missing information.

"One of the major drawbacks of existing fdrs," says Napolitano, "is that they do not record some important flight parameters, such as angular deflections of the main control surfaces, including rudder, elevators and flaps". But he says that the data stored on existing fdrs -- airspeed, pitch, roll, altitude and so on -- can be used to reconstruct those deflections.

Napolitano, his colleague David Martinelli, and a team of graduate students are developing a neural network to do just that. Neural networks are programmes that mimic the way neurons behave in an animal's brain, enabling them to learn. Using extensive flight data from a Boeing 737, including the angular deflections of control surfaces, Napolitano has trained his neural network to reconstruct the deflections from the limited data provided by a conventional fdr. The reconstructed angles are accurate to within a couple degrees.

The virtual fdr requires no new hardware on planes. After a crash, investigators would feed the conventional fdr data through the programme, which would then reconstruct the angular deflections of the control surfaces in the moments before the crash.

The software could serve either as a temporary solution, or as an alternative to replacing current fdrs. Either way, the virtual fdr would bring more brains to conventional black boxes.