Weakening brain cells affect the output of the nerve cell 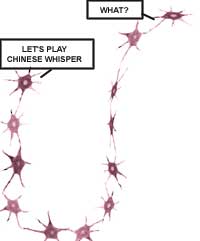 two Australian neuroscientists have increased our understanding of how brain cells work -- a mystery that after more than a century of neuroscience remains unsolved. In experiments involving slices of rat brains, Stephen R Williams and Greg J Stuart of the Australian National University's John Curtin School of Medical Research have uncovered some curious aspects of brain cell behaviour. The researchers have confirmed that electrical signals in brain cells get weaker when they travel further.

"It is known that electrical signals dissipate the further they travel down power cords and telephone cables," said Stuart. "While it has been suspected the same would occur in nerve cells, this is the first time it has been proven." But in an odd twist, they have found that signals that travel long distances can also play a very significant role in the final output of the nerve cell. At any point in time, nerve cells receive up to 100,000 inputs from other nerve cells. They receive these messages via 'dendrites', which can be likened to the branches of a tree.

At some stage, the main body of the cell -- the base of the tree -- adds up all these signals and generates a nerve impulse, which it passes on to thousands of other nerve cells via a system of fibres that can be likened to the roots of the tree. One puzzling question is how a neuron integrates this vast number of inputs to generate an overall response. Williams and Stuart's findings provide some clues. By measuring inputs made at different distances from the base of the cell, they found that signals generated in distant dendrites presented themselves as weaker signals in the base.

While this had been suspected, Williams and Stuart found it was not altogether that simple. "When we activated a particular combination of distant inputs, we found these same signals could be amplified and have a very powerful influence on the overall output from the nerve cell," said Stuart. This generates a new theory about the role of distant dendrites.

"The research is an elegant work and moves us one step closer to answering the remarkably simple question of what nerve cells in the brain do," said Bartlett W Mel of the University of California, Los Angeles, usa. Stuart said the research has no immediate clinical application, but could eventually help patients with neurological disorders. "If we're ever to understand why neurones go haywire in epilepsy or get lost in dementia, we are going to need to understand how single neurones work," he said.