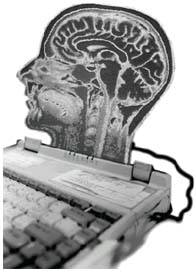 the human brain is arguably the most complex structure known to us. Consisting of roughly ten billion neurons with trillions of connections, this half kilogram of tissue performs functions like language learning and visual perception, which the best computers can't even begin to mimic. But what happens when one merges the world of neurobiology with that of computer hardware? This question was hard to answer till recently. But now, several groups have reported fabricating a simple network of neurons on top of transistors which can then communicate with each other. This is certainly a revolutionary first step in the long journey of our understanding the human brain, and eventually controlling it.

The basic unit of the nervous system in animals is a neuron or a nerve cell. With few exceptions, most neurons consist of three distinct regions: the cell body, or soma; the nerve fibre, or axon; and the receiving processes, or dendrites. The stimulus is conducted along the cell as an electrical impulse, which is basically a brief change in the electrical charge on the cell membrane of the neuron. Neuroscientists have been using needle like electrodes to probe individual neurons for many years. These electrodes can detect the electrical activity of the neuron and hence throw some light on the physiological basis of transmission of neural impulses. But scientists have been not very successful at monitoring networks of neurons, where all the interesting activity takes place. The reason for this failure is that the network of interconnections between even a few neurons can be so complex that it is extremely difficult to make sense of the signals coming into any individual cell.

One of the first attempts to build neuronal networks which communicate with each other through microelectronics was in 1991 at the Max Plank Institute for Biochemistry in Germany by Peter Fromherz. They were able to grow a leech neuron atop a semiconductor device called a field effect transistor ( fet ). The fet monitored the electrical activity of the neuron since the current through the transistor would change when the neuron "fired". Again in 1995, Fromherz and his colleagues were able to reverse the process when a small electrical current in the fet could "fire" the neuron on top of it. But these attempts were again restricted to one cell.

Recently researchers have been trying to build more complex networks on top of semiconductor devices. A group led by James Hickman of the George Washington University, usa has created a simple neural circuit using conventional lithographic techniques. These are the very same techniques used in fabricating computer chips. They started by using a glass substrate which has been coated with a very thin layer of a substance called deta . This is a neuron-friendly compound to which the neurons have an affinity. The sample was then exposed to ultraviolet light through a stencilled metal mask. Wherever the light hit the surface, the deta was removed while in the masked areas the compound remained. Next the scientists added a neuron repelling chemical to the substrate which attached itself to the areas where there was no deta . The whole thing was then placed in a culture where neurons could grow. What was surprising was that they observed a pair of cells migrate to the deta region and then send out their axons along the cell-friendly material, making connections with each other. When one of the neurons was stimulated the other "fired".

These and other successes in the field of hybridisation of semiconductor and neural circuits have far-reaching consequences. One of the goals is to be able to use them for therapeutic purposes where these devices could interface with the nervous system.