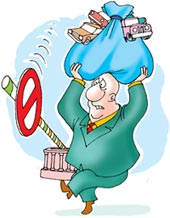 The Parliamentary Standing Committee on Industry has demanded a complete ban on the import of second-hand cars and used tyres, in its report tabled in parliament.

The panel feels that the country is being converted into a "dumping ground for second-hand cars, which is eating into the domestic (automobile) industry". The committee further stated that if banning is incompatible with the World Trade Organization (wto) agreement, the government should come out with stringent rules and regulations to discourage the import of second-hand cars. The auto policy, announced in March last year, was also flayed by the committe for not giving adequate incentives to upgrade and modernise buses -- a crucial component of the public transport system in India.

Interestingly, the automobile industry, represented by the Society of Indian Automobile Manufacturers, had issued congratulatory statements praising the auto policy. It had said that with the auto policy in place, the automotive industry in the country would get a further fillip to become vibrant and globally competitive.