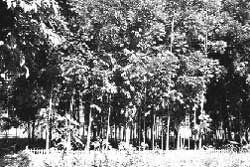 In a bid to stop mahogony trade, a Brazilian government decree has suspended all forest management plans for logging mahogany in the states of Paro, Mato, Grosso and Acre. The announcement, approved by the country's environment and natural resources ministry, means an end to the illegal mahogany industry in Brazil.

Although, Greenpeace, an international ngo, has declared the government move a victory in its three-year campaign against illegal logging of mahogany, the pressure from the strong wood mafia is already telling on the Brazilian government.