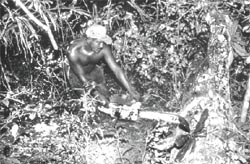 Destruction of Brazil's Amazon rainforest in 2000 was the highest since 1995. The National Institute for Space Research reports that 0.56 per cent of the total jungle was cut in 2000. But since 1999, the number of forest fires decreased by 86 per cent. The institute's officials attribute the deforestation to extensive logging for both commercial and residential purposes. "A growing economy has increased demand for timber and land," said Mary Allegretti, secretary for Amazon affairs for the country's environment ministry. "This destruction rate is alarming," says Garo Batmanian, general secretary of the World Wide Fund for Nature. Environmentalists say that quick action is needed to reverse the trend.