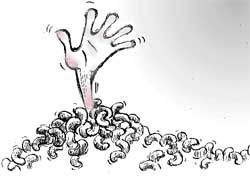 The soybean productivity levels of this South American country are rising sharply, a trend that could drastically increase production if planting continues to expand, a Brazilian researcher said recently.

But in the key southern state of Parana, yields were still hovering around the 2,700-kg mark. "We could, with local technology, go from 2,700-kg-per-ha to between 3,000 and 3,500 kg-per-ha," he said. "With biotechnology, precision agriculture and other available techniques, maybe we could go even higher," he added.

The vast scrubland plains of Brazil's centre-west, known locally as the "cerrado", also offered the opportunity to double the nation's total grain production, Galerani said. Currently, a total of 136 million ha of the cerrado is being used for a variety of purposes such as growing soybean crops and as cattle pasture, but the area had a potential 207 million ha of available land. If fully used, it could boost Brazil's total grain production to 192 million tonnes from 80 million tonnes.