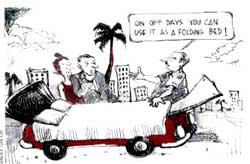 Sao Paulo, the largest city in South America is to introduce permanent restrictions on the use of cars in an attempt to alleviate the city's growing transport problems and curb pollution. Residents have been banned from using their cars during peak hours in the morning and early evening once a week.

The scheme is a result of separate restrictions during winter months aimed at reducing pollution levels. In cold temperatures, the polluting gases from vehicles emissions remain closer to the ground, causing serious public health problems.

The new restrictions, which are designed to reduce congestion during busy periods, will run for six months and can then be renewed by the city council.

Local politicians, however, fear the city's increasing traffic problems are encouraging businesses to move to other cities. Sale of cars have grown sharply since the launch of economic reforms three years ago which has brought inflation under control and set off a consumer boom. Brazil now produces nearly two million cars a year and the fleet of over five million cars in Sao Paulo is expanding by 250,000 a year.

Environmentalists say that these curbs cannot serve as a long-term solution to the city's problems. They insist that an increased investment in public transport is vital to reduce not only the transport problems but also the growing pollution.