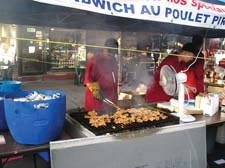 In November last year, Brazil's National Health Monitoring Agency launched a public debate on regulations that would ban radio and tv advertising for soft drinks and foods with sugar, saturated fat or salt. The government is expected to issue a decree on such measures in June. Brazil is not alone. Junk food regulation bills are also on the anvil in other Latin American countries such as Mexico and Chile.

Regulating advertising "is an essential to contain childhood obesity," says Mariana del Bosco Rodrigues, a nutritionist with the Brazilian Association for the Study of Obesity. Murilo Diversi, a food expert at idec, the Brazilian consumer defence institute, said that in his country, junk food ads can be regulated by decree. But things have not been that smooth in Mexico. Here lawmakers have been studying a bill for restricting junk food ads.There is also a bill for labelling such products with warnings about their lack of nutritional value. But these have run into roadblocks, and lawmakers have reported meddling and even threats from manufacturers.