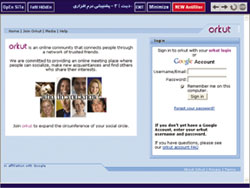 Google has agreed to abide by a Brazilian court order requiring it to turn over information about Brazilian users of its social networking site, Orkut, who have been accused of crimes. The search giant had earlier opposed the us Department of Justice request for such data.

"The Brazilian authorities' request differs because it is small, narrow and discrete in most cases," Google's associate general counsel Nicole Wong told correspondents of the us daily, Washington Post.

A Brazilian judge had threatened to fine Google about us $23,000 per day if it declined to comply with court orders requesting the user data.The data requested in the South American case is designed to help Brazilian law enforcement identify people accused of engaging in racism, paedophilia, and homophobia, all considered criminal behaviour there.

Orkut has become particularly popular in Brazil, which is now home to about three-fourths of the service's estimated 17 million users, the Washington Post reported.