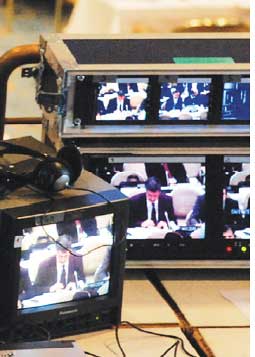 AT THE end of 12 days of negotiation, the chairperson of the working group on Kyoto Protocol locked up all negotiators for two hours at night. His purpose: to pressure them into reaching a consensus. The rich nations agreed to a concession: to discuss targets for emission reduction in June 2009.


The meeting was supposed to draft the negotiating text for preparing an action plan on climate change. But a sharp divide between rich, industrialized countries and developing nations prevented an agreement. Under the Ad Hoc Working Group on Kyoto Protocol (awg - kp), developing nations demanded that the aggregate as well as individual emission reduction targets of rich and industrialized (Annex 1) countries be specified and put into the negotiating text. The EU, Australia and Japan argued that reduction targets can be fixed only if the rules for land use, land use change and forestry, and the base year for emission reduction are fixed. Lead Chinese negotiator Yu Qingtai called this stand a diversionary tactic since rich countries are involved in land use and forestry negotiations as well.


The negotiating parties agree on keeping the rise in temperature within 2C, but not on emission reductions by rich countries needed to achieve this. Small island states, threatened by rising sea level, called for a 40 per cent reduction from the 1990 level by 2020 and more than 95 per cent by 2050. The group of 77 developing countries G-77 and China supported 25-40 per cent reduction by 2020 and 95 per cent by 2050, as suggested by the Intergovernmental Panel on Climate Change (ipcc), a scientific body set up to evaluate risks. South Africa shocked developed countries by proposing interim targets.

At the heart of these numbers games lies a contradiction between scientific and political reality. Japan trashed the G-77 suggestion of reduction by 2020 by refusing to take ipcc suggestions as guiding principles for negotiation. US negotiators stayed on the extreme end of political balancing. The Obama government is committed to reducing the US emission level in 2020 to that of the 1990 level, which is viewed as too little by everyone. Its chief negotiator Jonathan Pershing said in Bonn, "The US will not join the Kyoto Protocol because it does not work for us politically. We are looking at another deal we can sign."


Other developed nations have made oblique remarks that amount to undermining the Kyoto Protocol. Japan said it "cannot accept any scenario of simple extension of Kyoto Protocol which does not include non-parties (US) and major developing countries."

Developing nations stressed their demand to keep the "historic emission" as a guiding factor while calculating each nation's share in climate mitigation. Pershing summed up rich nations' response when he said, "I found it disconcerting in these negotiations the suggestions that we need to pay enormous sums for something seemingly evil we have done in the last 150 years."

Yvo de Boer, executive secretary of the UN Framework Convention on Climate Change (unfccc), said developing countries can be expected to do more only if developed nations "take ambitious individual targets and also make a significant and predictable financial architecture for developing countries".

The o nly bright side was the Indian proposal of setting up a network of Climate Innovation Centres that was well received by all parties.


The Bonn meet can be marked as a milestone in rubbishing all that has been done in last decade if the discussions preceeding the UN climate summit in Copenhagen in December do not break the stalemate. On the last night of negotiations in Bonn developing nations fought for hours to include "a key focus" in the following statement in the concluding text: "The awg-kp agreed to continue its deliberations on the scale of emission reductions to be achieved by Annex I Parties in aggregate as a key focus of its eight session".