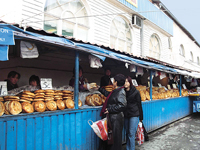 As wheat prices soar across Central Asia, officials in Kazakhstan, the region's key grain supplier, have resorted to controlling exports to stem rising domestic costs. Experts fear the move will complicate matters for its neighbouring nations, pushing wheat prices further up (see 'Forks down for pasta', Down To Earth, October 15, 2007).

The Kazakh government estimates that the country will harvest 19-20 million tonnes of grain this season. "This is enough to satisfy domestic demand and export potential," Deputy Agriculture Minister Akylbek Kurishbayev told parliament on September 12. To address concerns about price rise, the government has, however, imposed restrictions on grain exports and introduced a licensing system for grain exporters. Bread and flour prices in the country have risen by about 14 per cent. The government is now planning to export grains to its neighbours at a hiked price to reap benefits. The move will, however, hit Kazakhstan's poor neighbours. In an indication of how spiralling food prices are hitting its economy, Kyrgyzstan has revised its annual inflation estimate from 5-6 per cent to 9 per cent. Officials have set up a Food Security Council to stabilize prices and are considering tax perks for traders dealing in baked products. Bread prices in Kyrgyzstan have gone up by 50 per cent. Protests were reported in Uzbekistan and Tajikistan over soaring prices.