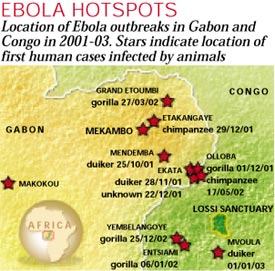 for the first time researchers have verified that Ebola virus can spread from infected animal corpses to humans. The findings would prove helpful in combating the virus, which causes haemorrhagic fever and death within a few days of infecting people. The most lethal strains of the virus, causing up to 88 per cent mortality, are found in forested areas of Africa, particularly Gabon and the Democratic Republic of Congo (drc).

Unfortunately, the genesis of most African Ebola epidemics were never identified. Therefore, Eric Leroy and his co-workers at the International Centre for Medical Research, Gabon, set about on a quest to track down the root of the problem. Tropical forests in Gabon and drc were chosen as the hunting grounds because local villagers had found there a large number of gorilla and duiker carcasses just before and during the 2001 human Ebola outbreaks in Gabon. The information intrigued the researchers, as strewn carcasses are rarely seen in these tropical forests: the very high temperature rapidly decomposes them. Another clue for the study team came from Congo's Lossi sanctuary, where the virus was detected in gorillas and chimpanzees in early December 2002; the first human case of Ebola was reported from the region at the end of the month.

Using sophisticated genetic analysis, the researchers established that carcasses found in the forests were infected with the virus. Further probe showed that hunters handling the carcasses got infected and they subsequently transferred the virus to their community members. The term "epidemic chain" was used to describe this spread. Ten such epidemic chains were found between October 2001 and May 2003 in Gabon and drc (Science, Vol 303, No 5656, January 16, 2004).