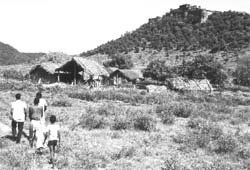 people of villages in and around the Sariska Tiger Reserve in Alwar district of Rajasthan have taken a vow to protect wildlife, mainly tigers, by joining hands with the forest department. A decision to form a public body called the Sariska Sansad (Sariska Parliament), which involve the village communities as well as the forest department in park management decisions, was taken at a workshop held on September 8-10. It was organised by Tarun Bharat Sangh ( tbs ), a voluntary agency that has been supporting the villages in building traditional earthen check-dams called johad s for the past 15 years, which has revived the ecology and the economy of the region.

Though the workshop was well attended, only two recommendations came out of it. The first is to put a blanket ban on all tourist activity in the tiger reserve in the July-September period, which is the breeding season for wild animals. The second is to stop all mining activity in and around the reserve. Another issue that came up was the moving of some villages from the core area of the reserve and rehabilitating them outside. If it happens, this would hasten the elevation of the reserve to the status of a national park, which has been high on the agenda of the state forest department ever since it was proposed in 1982 and then again in 1984.

The forest department has used all kinds of means, including threats to villagers and filing false cases of poaching and felling of trees to throw out the people settled inside the forest. It did not spare even the tbs workers, against whom 117 false cases were filed. Even at the workshop, the intentions of the high-ranking forest officials to this end were more than evident.

The story of mining is similarly lopsided. While the forest department continues to hand out new mining leases, denotifying forest area, it is the people who have fought against the mining lobby, going to the extent of filing a public interest petition in the Supreme Court in 1991. Rajendra Singh, secretary of tbs , points out that as many 70 mines operate in close proximity to the forest. S C Sharma, inspector general (forests) with the Union ministry of environment and forests, put the onus of preventing tourist activities in the breeding season on the villagers. The villagers, however, were conspicuous by their absence on the final day when all these recommendations were being discussed.