A historic agreement to conserve Antarctica becomes a legally-binding treaty 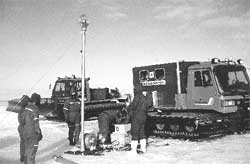 with Japan ratifying the landmark Environmental Protection Protocol on December 15, the Antarctic Treaty - signed in 1959 - became a legal-binding instrument. Japan was the last of the 26 member nations to ratify the protocol. It bans mining in Antarctica for a minimum of 50 years and designates the whole continent and its dependent marine ecosystem as a "natural reserve devoted to peace and science." Entry into force of the protocol is necessary to safeguard Antarctica's status as a global wilderness area and scientific laboratory. The protocol will enter into force in 30 days.

Negotiated in 1991, it has taken over six years for all member nations to ratify the protocol. Finland and Russia have recently ratified the protocol.For us environmental organisations that were the first to oppose the potential opening of mining and oil drilling in Antarctica and were also responsible for building the strongest possible international agreement to protect the Antarctic environment, international ratification has been a major victory. The us ratified the protocol in April 1996.

The Washington, dc -based environmental group The Antarctica Project and the environmental pressure group Greenpeace were the first to applaud the completion of the ratification process. "Antarctica is the world's last great wilderness, a continent of awe-inspiring beauty, and a vital international scientific laboratory," said Beth Clark, director of The Antarctica Project. "By establishing high standards for all human activities in the region, the protocol goes a long way in safeguarding Antarctica before it suffers from the human interference," she added.

Gerry Leape of Greenpeace, in a press release, said: "The ratification of the Antarctic protocol is especially gratifying when viewed in contrast to the disappointing treaty on climate change hammered out last week in Kyoto." The protocol has shown that countries of the world can come together to achieve a meaningful environmental goal, he added. Greenpeace has been campaigning for the last 13 years for Antarctica to be declared a World Park, conceived to be a legally enforceable, internationally accepted administrative system for the protection of the Antarctic wilderness. In 1987, Greenpeace constructed and maintained the first and only non-governmental base in Antarctica devoted to research and preservation of the environment.

The Antarctic Treaty has kept the continent free of conflict. But human pressures on the continent's unique environment have been growing rapidly from increased numbers of scientific research stations and tourist ships. Besides banning all oil and mineral exploration and mining, the protocol contains a series of crucial safeguards on environmental impact assessment of all activities; waste disposal, marine pollution, specially protected areas, and conservation of wildlife. A committee on environmental protection will oversee its operation.

Antarctica represents about ten per cent of the Earth's surface, and plays a central role in regulating the planet's weather patterns and ocean circulation systems. The surrounding seas support a wealth of fauna including penguins and other seabirds, fish, seals and whales. The pristine nature of the region provides unique opportunities for scientific research that is crucial to the understanding and monitoring of global climate change, ozone depletion, and atmospheric pollution.