A cure for the world's most deadly disease, Ebola, is on the anvil 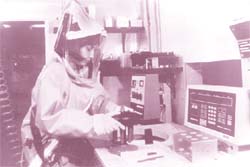 a vaccine for the Ebola virus may be just round the corner. Researchers at the us -based National Institutes of Health have successfully tested a vaccine on animals which might open new avenues for the development of a vaccine for humans.

Of the eight macaques monkeys used in the study, four were injected with the deoxyribonucleic acid ( dna ) from the virus, three times over a period of four weeks. After a few months of rest -- during which the animals developed immunity -- the were given a genetically-engineered adenovirus (cold virus) which expressed viral proteins to boost the immune response. The monkeys were then inoculated with the pathogen to test the protective efficacy of the vaccine. The results showed that while vaccinated monkeys did not show any symptom, the four non-immunised monkeys developed symptoms and three of them died. "We are confident of coming up with a vaccine for humans very soon," says Gary Nabel of nih who is with the research team ( Nature , Vol 408, p605-609).

Ebola is a rare filovirus which comes forth when the virus bridges the species gap from an unknown natural reservoir to human beings. One of the viral genes produces a glycoprotien which destroys the walls of cells such as those which line the blood vessels. The person ultimately bleeds to death, which is one of the characteristic features of the incurable disease. The virus replicates more rapidly than the body is able to build up its immune defence and the fatality rate is 90 per cent.

The breakthrough comes at a time when the virus has claimed more than 129 lives in northern Uganda and a total of at least 337 cases of the disease have been reported this year (see 'Sure killer' Down To Earth, Vol 9, No 12). Five years ago, it claimed hundreds of lives in Zaire (see 'What a bloody mess', Down To Earth , Vol 4, No 2). The vaccine will not only help people in the regions affected, but also medical personnel who are treating the patients.

The present strategy is to isolate the patients and limit its spread. But researchers feel that the disease may become difficult control if contact between species became more frequent due to destruction of habitats.