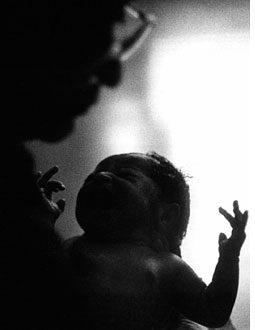 there is now an addition to the list of benefits that breast milk offers. It protects infants from arsenic, says a study conducted inBangladesh. The study is crucial because almost 50 per cent of the tube-wells providing drinking water to about 57 million people in Bangladesh contain arsenic at levels exceeding who's drinking water guidelines of 10 microgramme per litre (g/l). In India too, the situation is chronic, especially in West Bengal, Uttar Pradesh and Bihar.

The study, carried out on infants and lactating mothers in Matlab, south-east of Dhaka, found that arsenic concentrations in breast milk were low--about 1 g/l--in rural women despite high arsenic exposure. Tests on urine samples of infants showed that those who were exclusively breast-fed had about 0.3-29 g/l of arsenic; those partially breast-fed had 0.4-1,520 g/l. The concentration of arsenic in the partially breast-fed cases were higher because the water used in the food for infants had arsenic as high as 1,000 g/l.

Also, this is the first study that states that arsenic in breast milk is mainly in the trivalent inorganic form, called arsenite. "This is part of our ongoing research in Bangladesh with the aim of increasing understanding of arsenic-related health risks early in life. We wanted to assess the effects of pre-and post-natal arsenic exposure on foetal and child development and health," says Marie Vahter, research scientist at the Institute of Environmental Medicine, Karolinska Institutet, Stockholm, Sweden. The study was published online in Environmental Health Perspectives on March 6, 2008.

Arsenic reaches body fluids as a result of intake of water with high arsenic content. During pregnancy, the body produces a chemical called choline in increased amounts. The choline content in human breast milk doubles during the first few weeks after delivery. Choline, which is required for developing the brain of the foetus, also facilitates metabolism of the inorganic arsenic to various metabolites which are excreted from the body.

"Methylated arsenic is one such metabolite. The methylated arsenic metabolites in blood do not easily pass over to the mammary glands. Thus an efficient maternal methylation of inorganic arsenic leads to less arsenic in breast milk," says J P Dadich, project co-ordinator, Breast-Feeding Promotion Network of India (bpni). Breast milk's role doesn't stop there. The study showed that methylation of inorganic arsenic happens in infants as well, which protects them from arsenic. This is because the endogenous maternal synthesis of choline provides a high level of circulating free choline in the newborn.

The ability of mother's body to produce choline and the child to be able to ingest and get rid of arsenic depends on nutrition, says Qazi Qamaruzzaman, chairperson, Dhaka Community Hospital. The economically poor are usually the worst affected, he adds.

According to Pradip Sikdar, associate professor, Department of Environment Management, Indian Institute of Social Welfare and Business Management, Kolkata, "This is a very important finding. It should be passed on to health workers working in rural areas and breast feeding should be encouraged." Arun Gupta, paediatrician and national coordinator, bpni, agrees.

"Since protection is entirely dependent on exclusivebreastfeeding, any attempt to give the child anything other than breast milk will lead to higher arsenic exposure," he says.

There are, however, some reservations on the research. "There needs to be an extensive study taking cases from different economic groups and from different parts of Bangladesh, rather than just Matlab which has become an arsenic laboratory for the international community. A report from such an area is bound to be skewed," says Qamaruzzaman.

Dipankar Chakraborti of the School of Environmental Studies, Jadavpur University, Kolkata, also stresses on more studies. "Though there are few reports on arsenic concentration in human milk, the data is limited since it needs to be taken from a broader base and across different groups of people," Chakraborti wrote in the findings of his study published in Journal of Environmental Science and Health on October 1, 2007. He along with his colleague found that the concentration of arsenic in water, urine, hair and nail was quite high, while that in the breast milk of lactating mothers was quite low. Of every 10 cases, arsenic in breast milk was found only in five and was in the range of 2-5 g/l, and in urine it ranged from 8 to 36 g/l.