Breath test for B12

IT IS difficult to guage if one is suffering from vitamin B12 deficiency. The problem often remains undiagnosed for years because of inconspicuous symptoms like loss of appetite, fatigue, confusion and memory loss. The vitamin plays a crucial role in the functioning of brain and nervous system and for the formation of red blood cells. Left untreated vitamin B12 deficiency can lead to severe anaemia and neurological disorders like dementia. To compound the situation, most diagnostic tools available today fail to show accurate results. Some are even expensive. 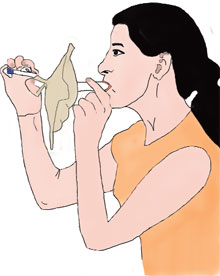 US scientists have recently developed a breath test which, they say, can accurately measure vitamin B12 level and will allow for a simple, non-invasive and low-cost diagnostic tool.

The new test—called B12 breath test or BBT—is based on the fact that vitamin B12 is crucial for the conversion of sodium propionate, a common bakery preservative, into carbon dioxide (CO2) inside the human body. Scientists with Metabolic Solutions Inc and University of Florida conducted a preliminary test on patients suffering from chronic pancreatitis, Crohn’s disease (infection in the small intestine due to overgrowth of gut bacteria), and patients over 65—all of them are likely to suffer from vitamin B12 deficiency. After fasting and not smoking for eight hours, they were given 25 mg of sodium propionate. The scientists collected their exhaled breath samples after 20 minutes for testing the amount of CO2 in it. More the vitamin B12, more the CO2 exhaled.

To differentiate the CO2 from that being emitted from various sources in the body through the exhaled air, the researchers used a variant of sodium propionate. This variant was labelled with a unique isotope of carbon, which made the distinction of CO2 released from sodium propionate possible.

To ascertain the accuracy of the breath test, the scientists compared the results with that obtained through various tests available for vitamin B12.

At present there are three blood based tests available to measure vitamin B12 levels—methylmalonic acid (MMA) test, homocysteine (HC) test and B12 serum test. When asked how BBT fares in comparison to these conventional tests, David Wagner, lead researcher of the study, explained: Serum vitamin B12 is the most widely used test but its accuracy is not great. Serum MMA levels have good accuracy but lab analysis is difficult and costly. It may also be influenced by kidney disease. Serum HC has limited utility for detecting vitamin B12 deficiency. On the contrary BBT shows accurate results within minutes and is non-invasive, he adds. The study was published in the June 23 issue of Journal of Breath Research.

Wagner now plans to conduct the trial on a larger group of people of different ethnicity and geographical locations. He believes the test may have broad range appeal in India as consumption of meat products, important source of vitamin B12, here is much lower than in other countries.