The automobile industry can breathe easy with the Supreme Court lifting its earlier restrictions on the sale of cars; plea for extending deadline on emission norms rejected 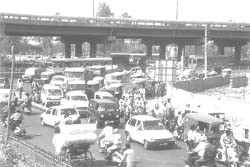 the Supreme Court, on May 13, 1999, removed the cap on car sales in the National Capital Region ( ncr ) and allowed self-certification for Euro-norm compliance by the automobile industry itself. At the same time, the apex court rejected the plea of the Union government and the automobile industry for extending the June 1, 1999, deadline regarding implementing the Court's April 29 order on emission norms. It has also exempted compressed natural gas vehicles from the ceiling.

On April 29, 1999, the three-judge bench comprising Chief Justice A S Anand, Justice B N Kirpal and Justice V N Khare had fixed the number of registrations of private vehicles in the ncr at 1,500 (1,250 petrol and 250 diesel vehicles) per month if they did not conform to Euro i standards (see Down To Earth , Vol 8, No 1).

The court order came in the wake of the hearing on applications filed by the Union of India, Maruti Udyog Limited ( mul ), Maruti Car Dealers' Association ( mcda ) and Association of Indian Automobile Manufacturers ( aiam ), among others, seeking an extension of the deadline for implementing stricter emission norms.

The hearing was scheduled in a hurry following pressures from the automobile lobby and the Union Government to modify the earlier court order. Surprisingly, the additional solicitor-general K N Raval, present in the court on behalf of the Union government, pleaded on the industry's behalf. He requested a suitable deadline extension as certain equipment needed for testing the vehicles for specified emission norms was yet to be suitably calibrated at the testing centres in Ahmadnagar and Pune.

Ironically, instead of setting up a proper certification system to authenticate industry's claims, the Government wanted the court to specify how it should go about it. Having no option, the bench ruled that till the time the government came up with adequate testing measures, vehicle manufacturers could self-certify whether their vehicles were Euro i or Euro ii compliant. "Our order allows the transport authority to register the vehicle on a certificate from the manufacturer," said Justice A S Anand. Justice B N Kirpal even admonished the government counsel saying that he seemed to be representing the industry and not the government of India.

Unhappy with the turn of events, Sunita Narain, deputy director, Centre for Science and Environment ( cse) , a Delhi-based non-governmental organisation that had played a pivotal role in enforcing stricter emission norms, said: "In effect, the government has abdicated its responsibility to certify Euro norm compliance to the vehicle manufacturers. This clearly shows the incompetence of the official bodies to deal with air pollution control strategies."

Raval further submitted that since a number of government department and public organisations, including hospitals, had placed orders for a number of cars for official use prior to the April 29 ruling and even in the month of May, appropriate extension of time for implementation of the order should be given. Raval pleaded that the government itself was particularly interested in making the emission norms applicable throughout the country.

The automobile industry, particularly mul which was the worst hit by the earlier order, had come to the court in the hope of getting a major concession on the earlier ruling. mul counsel K K Venugopal pleaded for an extension of the June 1 deadline to October 1, 1999 as without this, Maruti's production would be severely affected. While senior counsel G L Sanghi pleaded that consumers who have already booked cars should be allowed to register in the ncr

What was encouraging for the environmentalists was that the judges took a serious view of the issue. Angered by repeated pleas from both the industry and the government for extension of deadline, Justice Anand wondered how the government had permitted outdated technology to come into India all these years? He said that most automakers had the technology and exported cars that comply to more advanced norms in Europe, but they dump obsolete technology in India with no concern for public health.

Public interest groups like cse, though happy with the slapping of tighter norms for all cars, are concerned because the original recommendation of the Environment Pollution (Prevention and Control) Authority ( epca) to restrict the polluting diesel vehicles and to cut toxic particulate emissions in Delhi, got sidelined as there is no cap on diesel car sales.
Says Narain: "Though this is an interim order, we hope that this issue will get addressed both by the epca and the Supreme Court after the court reopens in July and effective action will be initiated to stop dieselisation of the private vehicle fleet."