Animal conservation practices should be rethought 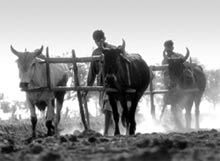 a recent analysis could radically improve the way humanity is trying to conserve the genetic pool of livestock. It shows that farm animals were domesticated in many locations in ancient times. The finding challenges the traditional views about animal husbandry. Many anthropologists staunchly advocate that domestication simultaneously took place only in three areas -- Southwest Asia, East Asia and the Andean chain of South America. Cattle, sheep, goats, pigs and buffaloes were tamed in two Asian regions, whereas llamas and the alpacas were domesticated in South America. This viewpoint has made most 'conservation dilettantes' believe that the gene pool of modern farm animals is not very diverse, and thus that their protection is child's play. The new analysis indicates that if this approach remains the norm of conservation practices, then many species will soon become extinct.

The study was conducted by Michael W Bruford of the us-based Cardiff University, Daniel G Bradley of the uk-based Trinity College, and Gordon Luikart of France-based Universit Joseph Fourier. Their research is unique as molecular markers -- the mitochondrial and nuclear dna found in the cells of all creatures -- have been used for the first time to compare the genetic structures of modern farm animals and their wild ancestors. The mitochondrial and nuclear dna sequences can accurately reveal geographical origins of species because they get altered with a change in environmental conditions.

The researchers primarily focussed on the genetic variance of two types of cattle -- zebu and taurine. Zebu cattle have a shoulder hump and are today mainly found in eastern Eurasia and eastern Africa. The taurine, on the other hand, lack a hump and are at present the predominant cattle of Europe, north and west Africa, and the Middle East. As per the traditional view, both the types can be differentiated only by certain characteristics, as both have originated from a single domestication event.

The researchers analysed the molecular markers of (both the modern and ancient) taurines from Europe and Africa and zebus from India and Africa. Indian zebus were found to have a profoundly different mitochondrial dna profile as compared to the European and African taurines, as well as the African zebus. This made the researchers doubt the traditional view. After probing further into the mitochondrial and nuclear dna sequences of almost all the species of farm animals, the researchers found that sheep, goats, buffaloes found in various parts of the world had extremely varied genetic structure. Their mitochondrial and nuclear dna sequences showed that they had undergone domestication events several times in many parts of the world.

According to the researchers, their findings not only highlight the need to change the views of conservationists, but also make the protection programmes more region-specific. Secondly, efforts should be made to document the genetic diversity. Genome sequencing would help a lot in doing so.