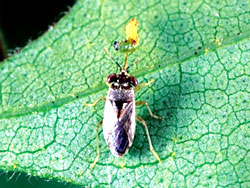 controlling agricultural pests through their natural predators is environmentally preferable to using pesticides, which contaminate the soil, groundwater and even the food grown. However, raising natural predators and supplying them works out to be more expensive than resorting to pesticides. But now, a group of Israeli and Dutch scientists has developed techniques to make harvesting useful insects economically viable.

Providing suitable food material and creating the right environment for the predators to reproduce are crucial to harvesting them. All earlier attempts to grow and reproduce pest predators have used their natural foods and egg-laying media. But the success of this approach has been limited. It is difficult to ensure year-round availability of natural food, which is also prone to drying out or decaying because of fungal growth.Which is why scientists belonging to Bio-Bee Sde Eliyahu in Israel and Koppert Biological Systems from the Netherlands worked on developing artificial food.

"Finding a coating that would keep liquid food well preserved and in good condition, but enable the bug to pierce through it and feed, was a huge challenge," says Shimon Steinberg of Bio-Bee. Koppert used its new encapsulation technology to prepare an artificial liquid diet in the form of coated droplets.

The encapsulated food was found acceptable to two major predatory bugs -- Orius laevigatus (pirate bug) which attacks mainly thrips, and Macrolophus caliginosus (mirid bug), a general predator of whitefly, thrips, leaf miners and mites. Thrips and whiteflies are among the commonest pests that attack a wide variety of plants.

The encapsulated food is cheaper than flour-moth eggs that are currently used by biocontrol companies to feed the predators. The project also developed gel substrates which have been accepted by the predators for egg-laying. Used as a substitute for the bean pods or tobacco plants which are the insects' natural choice, the gel substrates do not suffer from the common problems of drying up or decomposing. The substrate selected for development has the added bonus of being water-soluble, making it easy to extract pure, loose insect eggs and to determine their number precisely. This makes the production process much more reliable, unlike the use of the natural substrates. The process is now being tested on a semi-commercial, pilot scale.

Although the methodologies tested are based on key crop pest predators in Europe, the results can be adapted to harvest useful bugs in other regions.