65 per cent of bricks produced in India are manufactured in the Gangetic plains, which have one of the world’s most fertile alluvial soils 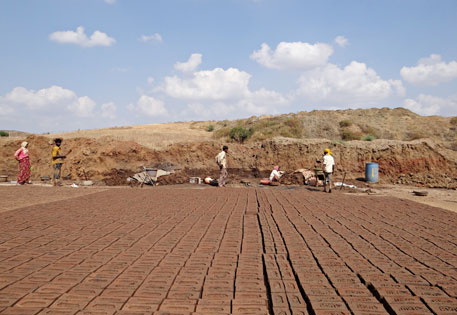 Unorganised brick kiln industries are not just emitting black carbon and polluting the air, they are also destroying the fertile top soil.

According to a research paper released by the Centre for Science and Environment on March 11at the Anil Agarwal Dialogue in Delhi, India is the second largest producer of bricks in the world and manufactures nearly 200 billion bricks a year. The paper states that 65 per cent of these bricks are produced in the Indo-Gangetic plains, which have one of the world’s most fertile alluvial plains.

“A study conducted in Thrivallur district of Tamil Nadu in 2004 showed how harmful these kilns can be to soil fertility,” says Vinish Kumar Kathuria of IIT-Mumbai, who conducted the study. According to Kathuria, the study found that farmers who leased their lands to brick kilns not just suffered monetary losses, their land also lost fertility.

“The cost-benefit analysis showed poor result,” he says. The land was leased at Rs 60,000 per acre (one acre equals 0.4 hectare) for three years. But the monetary returns received from crops were found to be far more, says Kathuria. Besides, farming also provided livelihood and food security, he adds.

“The farmers not only lost their top soil, but even natural manure. It took them more than three years to bring back the levels of natural manure in the soil. The fertility, however, is still not the same. This has put their livelihood at risk and they have been migrating to urban areas,” Kathuria says.

Kathuria says it high time for India to encourage the use of fly ash and construction and demolition waste for making bricks. “We do not have enough policies related to these issues,” says Kathuria. A 2008 law says that a brick must have a minimum 50 per cent fly ash content, but the “problem is that people are not convinced about the durability of these bricks,” says Kathuria.

“People buy bricks on the basis of its colour and texture. Therefore, they opt for traditional bricks. But as far as I know bricks with flay ash content are not much different from clay bricks,” he adds.