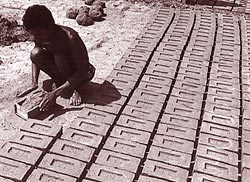 even as the August 31, 2004, deadline for the implementation of a 1999 notification of the Union ministry of environment and forests (moef) draws near,

more than 50,000 brick kilns in India have threatened to shut shop in a non-cooperation movement against it. The notification makes it mandatory for all manufacturing units located within 100-kilometre radius of coal or lignite based thermal power plants (tpps) to mix at least 25 per cent fly ash in their bricks, tiles or blocks. The brick makers say this would harm the quality of their products and the health of the workers. Meanwhile, the Delhi High Court issued an order on August 5, 2004, to ensure that government agencies concerned comply with the notification.

"There are practical problems in following the notification. These have been communicated to both the prime minister and the moef. Sadly, the ministry has not bothered to reply. This is forcing us to go for a non-cooperation movement against the government," rues R P S Chandel, president, All India Brick and Tile Manufacturers Federation (aibtmf). Chandel goes on to warn: "All the brick kilns in India will stop work from October this year if no action is taken in the coming month."

The aibtmf cites three major problems in complying with the notification. A study by Aligarh Muslim University has proved that mixing fly ash would weaken bricks by 40-50 per cent. Fly ash also harms the health of labourers involved in mixing it with clay. If mixer machines are introduced to prevent this, 0.45 million workers would be retrenched. Another hitch is the transportation cost. Brick manufacturers argue it should be borne by the tpps. Brick manufacturers also allege that there is no scientific basis to the specification of mixing at least 25 per cent fly ash. Anil Arora, joint secretary, Delhi Brick Kiln Owners Association, points out that for deciding on the amount of fly ash, the necessary studies on the nature of soil in different areas were not conducted.

The Union government's Fly Ash Mission (fam) claims that the aibtmf's resistance is a pressure tactic to scuttle the notification's implementation. "They [aibtmf] participated in framing the 1999 rules and the 2003 amendment but never raised any objection. Now, when they have failed to carry out their tasks, they are raising insignificant issues," alleges Vimal Kumar, director, fam. "The notification is in the interest of the environment," he avers. Concurring, N Kalidas of Visakhapatnam-based Institute of Social Waste Research and Ecological balance claims that no health problems are experienced by workers manufacturing FaL-G (fly ash, lime, gypsum) bricks in 1200 units in the country.