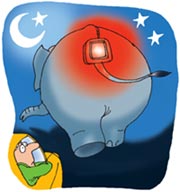 It's big! And it's glowing! Is it a blob from outer space? No, it's just an elephant.

Following a series of accidents in which speeding vehicles collided with elephants, the Wildlife Trust of India is kitting out Delhi's pet pachyderms with reflectors to make them more visible to drivers in the dark.

After several failed attempts with trinkets tied round the animals' ankles and colourful velcro bands, two of the capital's fleet of 30 elephants have been provided with the reflecting fabric. It is to be hung beneath their tails by ropes. If the project is successful, the rest of India's 5,000 domestic elephants will also be similarly attired.

To avoid traffic congestion, elephant owners in Delhi are permitted to take the animals out only at night or for three hours in the afternoon. Earlier, elephants were used to transport logs. Nowadays, they serve mainly as carriers of advertisement hoardings or are required during ceremonial occasions. Their owners are paid between Rs 5,000 and 10,000 per day.