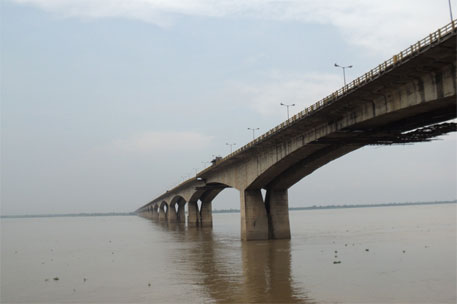 The Patna High Court has directed the Union government and Bihar state government to restore the original course of the Ganga in the state capital. Illegal sand mining is said to have forced a northward shift in the river.

In the last two decades, the Ganga has shifted by about two to three kilometres, affecting the Patna civil court situated on the banks of the river. Sewage from a city drain near the court, which would flow into the river, now tends to accumulate in the vicinity as the river has moved further away. The High Court has directed the authorities to start dredging to 15 metres to bring the Ganga back to its original course. It has also asked both the state and Union governments to work out a feasible plan to restore the original course of the river from Patna City to Digha ghat. The bench pulled up the state mining department and asked it to implement the Supreme Court order related to sand mining.

There are 86 ghats in Patna. Justice Reddy remarked that there are only a handful of cities in India which are situated along rivers. He said the river should be restored to make fresh water available to citizens.

Bihar-based river activist Dinesh Mishra said, “Many river activists had raised an alarm over rampant sand mining and the need to restore the original course of the Ganga.”

The 2012 Chhath stampede, which claimed 18 lives, occurred when a temporary bridge collapsed. The bridge had to be constructed to allow devotees to reach the river which has shifted two to three kilometres away.