All recommendations of food expert likely to be accepted by government 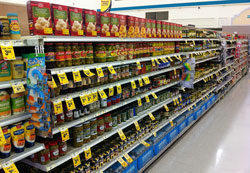 Britain will have its own special force to investigate the food industry and fight the trade in fraudulent foods. The Food Crime Unit (FCU) will be a specialist team within the Food Standards Agency (FSA), says BBC.

FCU was a major recommendation in a report  prepared by food security expert Chris Elliott, who was commissioned by the British government last year to probe the horsemeat scandal that rocked the country when it was found that horse meat was being passed off as beef. According to FSA and the Department for Environment, Food and Rural Affairs, the report addresses the current weaknesses of Britain’s food supply networks and suggests measures that can be taken to address them.

Some of the major recommendations include the development of a whistleblowing system that would better facilitate the reporting of food crime, unannounced audit checks by the food industry to protect businesses and their customers, improved laboratory testing capacity and the encouragement of a culture within the food industry that questions the source of its supply chain.

Elliott believes British consumers have one of the safest food systems in the world, but his suggestions would take the situation to a new level. “I believe the creation of the national food crime prevention framework will ensure that measures are put in place to further help protect consumers from any food fraud incidents in the future,” he told BBC.

Government ministers say all his recommendations would be accepted. “We have started implementing some of the recommendations of his report, in terms of information sharing, food companies being more transparent with each other and consumers looking for shorter supply chains. For example, there has been a 10 per cent rise in the sale of British beef in supermarkets,” BBC quotes Environment Secretary Elizabeth Truss.

Law enforcement authorities say food crime is growing in the country as international gangs are expanding their operations to fraudulent foods. “This has changed the scope of investigations. Criminals have realised that they can make the same amount of money by dealing with counterfeit food. Invariably, the sentences are much lighter,” Michael Ellis, assistant director of Interpol, told BBC.

Food crime can have fatal consequences. In 2008 in China, an industrial chemical, melamine, was added to increase the protein content of baby milk. Six babies died of severe kidney damage as a result. In 2012 in the Czech Republic, more than 40 people were killed by vodka and rum that had been laced with methanol, BBC reports. “Counterfeiting impacts everyone. The criminals do not care about hygiene or bacterial content in the end product. They just want the brand name to get money,” Ellis adds.