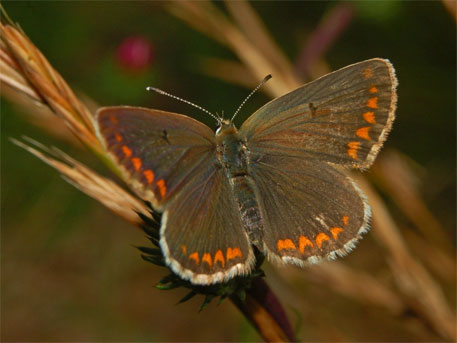 Climate change is affecting and altering nature’s micro worlds, too. Organisms present in different ecosystems react in varying degrees to this global phenomenon. Some of them resist and die while others, like the brown argus butterfly, adapt to survive.

A paper published in Ecology Letters in August observes shifts in the ecological niches of the brown argus butterfly (Aricia agestis ). This butterfly is moving from southern England upwards to counties such as Lincolnshire and South Yorkshire as these warmed up.

As the butterflies moved to newer areas, they adapted to new food sources such as members of Geraniaceae family (Geranium molle, Geranium dissectum and Erodium cicutarium). In their original habitat, the insect foraged on rockrose plant belonging to Cistaceae family (Helianthemum nummularium). When the researchers took the newly adapted butterflies to their natural habitat, they found that they were less fit to survive in these areas. On the other hand, individuals from ancestral rockrose habitats showed no reduction in fitness on Geraniaceae. Basically, as argus butterfly adapted to the new diet, it lost its ability to feed on the rockrose host.

While this shows that species like the brown argus butterfly have the ability to adapt to newer diets, it also puts the organism at risk as a narrower diet could be detrimental in the long term, the researchers say.