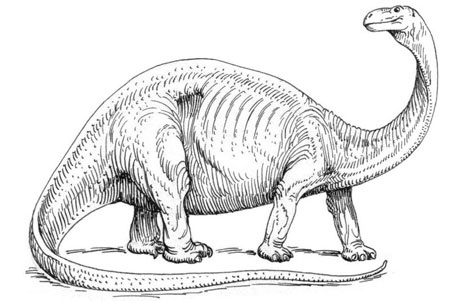 A team of British and Portuguese scientists have finally laid to rest, or as some would say, reignited, a paleontological controversy that is 112 years old.

On Tuesday, the team published the latest findings of their study in Peer J journal that states that Brontosaurus, an extinct species of dinosaur that has been popular in the human imagination since 1879, did indeed deserve its own genus.

The name Brontosaurus excelsus meaning noble thunder lizard was coined by Yale paleontologist Othniel Charles Marsh, who described the species in an 1879 paper titled Notice of New Jurassic Reptiles. It was based on Marsh’s discovery of an enormous partial skeleton exhumed from the 150-million-year-old rock of Como Bluff, Wyoming, USA. Just two years earlier, Marsh had named Apatosaurus ajax—the deceptive lizard—from a partial skeleton found in the Jurassic rock of Colorado.

But in 1903, paleontologist Elmer Riggs found that most of the traits that seemed to distinguish Marsh's two specimens (Brontosaurus and Apatosaurus) had to do with differences in growth, and it was more likely that the skeletons belonged to the same genus. In biology, a genus is a taxonomic rank used in the biological classification of living and fossil organisms. In the hierarchy of biological classification, genus comes above species and below family.

Since it was named first, Apatosaurus had priority over Brontosaurus. Despite the extreme similarity between Marsh’s skeletons, Riggs recognised that they differed just enough to be regarded as different species. Therefore Apatosaurus ajax would remain in place, and Brontosaurus was changed to Apatosaurus excelsus.

But in the 300-page study, released on Tuesday and compiled over a period of five years, authors, Emanuel Tschopp, Octavio Mateus, and Roger B J Benson, appear to have proved that Elmer Riggs was wrong.

The study painstakingly compared the two dinosaurs, part by part. The authors took about 477 different anatomical features and compared them across 81 different animals.

The study is likely to face some scrutiny from peers, but for the moment, it has sent shockwaves through the paleontology world.