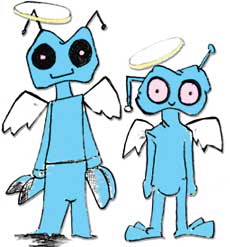 There is no conflict in believing in God and having some "extraterrestrial kinsmen". It's not Steven Spielberg saying this but Jose Gabriel Funes, Vatican's chief astronomer. "The possibility of life on other planets exists," says Funes, a Jesuit priest who heads the Vatican Observatory and is a scientific adviser to Pope Benedict. "How can we exclude that life has developed elsewhere," he told the Vatican newspaper L'Osservatore Romano, explaining that the large number of galaxies with their own planets made this possible.

In the interview headlined "The extraterrestrial is my brother," he said: "Just as there is a multiplicity of creatures on earth, there can be other beings, even intelligent ones, created by God. This is not in contrast with our faith because we cannot put limits on God's creative freedom."

Funes, who runs the observatory which is based south of Rome, held out the possibility that the human race might actually be the "lost sheep" of the universe. "There could be (other beings) who remained in full friendship with their creator," he said.