These robots know what teamwork means 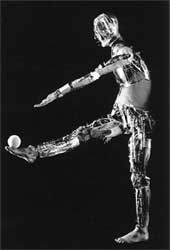 perceptions, motivations, deductions and choices. These seem simple enough for us. After all, making thousands of choices everyday, taking numerous decisions - important or insignificant - do not appear difficult to us.

But what comes easily to the human mind can become exceedingly difficult for technology to replicate. A robot, for instance, will find these apparently simple actions extremely complicated. Doing a job - no matter how simple - as a team can prove to be extremely complex for these machines. Working in a team to achieve a specific goal often requires a range of behaviours beyond the scope of the robots' microchips and electronic circuits.

But science is trying to make better workers out of these robots. Researchers at the Oak Ridge National Laboratory (ornl) in Tennessee, usa, have recently been attempting to make things a little easier for them.They are trying to teach the robots what teamwork is all about.

While working in a group, the human mind makes constant adaptations required to function as a team: taking quick decisions, assisting others, communicating with other members of the team and assessing the team's as well as an individual member's progress. How all these adaptations are made remains a mystery. But it is something that researchers at ornl are trying to imitate in their robot teams. However, programming behaviour patterns similar to humans' into robots so that these machines work as a team can prove to be difficult.

So far, research in robotics focused only on developing a single robot that could do all the jobs a certain mission requires. But, this approach has one problem: such a "Renaissance" robot would require a massive range of capabilities. A bigger problem is that one tiny malfunction is effective enough to ruin the entire mission.

The researchers at ornl are adopting a different path. They are focusing, not on a single machine, but on developing multiple, less-complex robots that can function in groups to accomplish complicated missions. A software called alliance was developed by the research team. alliance has been designed to "motivate" these robots to execute a certain task together and also to make simple adaptations as demanded by their work environment.

ornl 's robot team, comprising four small machines that resemble the robot r2d2 from George Lucas' Star Wars trilogy, has successfully demonstrated the alliance architecture in carrying out tasks such as cooperative manipulation, cooperative observation and movement in formation. The software gives each robot the ability to select an appropriate set of actions for itself according to the status of the mission and the actions of its "teammates".

Robots are prone to frequent mechanical failures, and it is often impossible for the researchers and scientists to foresee and program a response for every failure or malfunction that might occur jeopardising the mission.

And this is where alliance comes in. The software enables the machines to decide how to respond when a failure occurs threatening their mission. "Motivational behaviours" are programmed into each ornl robot to direct them in selecting actions. The primary motivations are called impatience and acquiescence: the first drives one robot to finish a task that is not being completed by another, while acquiescence allows it to give up a task that it cannot complete and let one of its teammates finish it successfully.

The alliance software distributes control equally to individual robot team members, allowing each to select its own tasks without any further directions from a central command. Each robot unit transmits information periodically to others about the status of its task.

The robots use sensory feedback to monitor their own and also their teammates' performance in order to indicate whether adequate progress is being made on each task. This enables the team to finish each task successfully regardless of the failure of a few machines.

ornl researchers claim that if successful, this new development could prove to be of immense help, not only to science, but also to several other fields. The potential applications for cooperative robot teams are innumerable: almost any task considered too hazardous or too repetitive for a human team can be executed successfully by these machines.

The possibilities are numerous: space exploration, cleanup of hazardous waste, surveillance and monitoring in contaminated areas, industrial and building maintenance, earthmoving, mining and military applications such as locating and detonating or defusing land mines, bombs and other explosive devices (Oak Ridge National Laboratory Review , Vol 30, No 1&2).