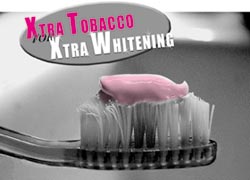 up to 68 per cent of adolescents in India use dental products containing tobacco, despite the 1992 amendment to India's Drugs and Cosmetics Act barring the use of tobacco in tooth-care products. This is the finding of a survey conducted by D N Sinha of Patna-based School of Preventive Oncology, P C Gupta of Mumbai-based Tata Institute of Fundamental Research, and M S Pednekar of Mumbai-based Tata Memorial Research Centre. The results are published in the British Medical Journal (Vol 328, No 7435, February 7, 2004).

After studying students from 14 states, the researchers found that the use of tobacco in tooth-care products varied from six per cent (in Goa) to 68 per cent (in Bihar). Tobacco toothpaste and tooth powder (lal dant manjan) were used rampantly in all the states studied (see table: Use of...). Gul (powdered tobacco product) was used in eight states. Other dentifrice products containing tobacco were mishri (roasted and powdered tobacco) bajjar or tapkir (dry snuff), gudakhu (paste of tobacco and molasses) and tuibur or hidakphu (tobacco water prepared by passing tobacco smoke through water).

The researchers assert that many companies are taking advantage of a widespread misconception -- tobacco is good for the teeth -- to market their harmful products. A test of five samples of red tooth powder (that did not declare tobacco as an ingredient) revealed a tobacco content of 9.3-248 milligrammes per gramme of tooth powder.