The National Biodiversity Authority (NBA) is seriously considering lodging a complaint against the developers of genetically modified brinjal. In response to a Right to Information (RTI) application filed by a Bengaluru-based non-profit, NBA disclosed that it is in an “advanced stage of lodging complaint against the alleged violators”. This means that Mahyco, a partner of biotech giant Monsanto, and their collaborators, including public research institutions, could get charged with bio-piracy for accessing indigenous brinjal varieties to develop Bt brinjal. The developers had gone ahead with developing and promoting Bt brinjal. India's first transgenic food crop, without taking sanctions from the respective biodiversity authorities. 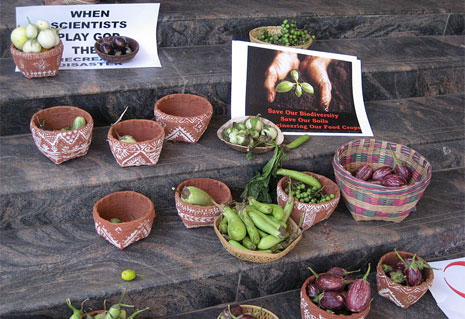 The RTI application with NBA was filed by Leo F Saldanha, coordinator-trustee of non-profit Environment Support Group (ESG), on April 26. It sought all documents and instructions pertaining to the Bt Brinjal case. NBA in its reply on May 21 stated it was proceeding with lodging a complaint, but refused to part with the documents, saying that since “the matter is under advanced stage of lodging of complaint and taking into account the intricacies which involve nuances of biotechnology, it is felt that it may not be appropriate to provide the documents/instructions at this juncture”.

It has taken the NBA over two years to investigate the first bio-piracy case filed in India and to arrive at what it calls the advanced stage of lodging of complaint. Initially, the authority was in a dilemma over whether to take action on ESG's complaint (see 'Bt brinjal:NBA may prosecute Mahyco, collaborators' ).

ESG has been chasing the Bt Brinjal case since February 2010. On February 15, 2010, it had filed a complaint before the Karnataka  Biodiversity Board with a copy marked to NBA, alleging that Mahyco, along with Sathguru Consultants (representing USAID and Cornell University) and various public-funded agriculture institutions, such as University of Agriculture Sciences-Dharwad, Tamil Nadu Agricultural University and Indian Institute of Vegetable Research, Varanasi, had accessing over 16 varieties of brinjal endemic to India without taking permissions from the authorities concerned.

ESG had alleged that accessing these varieties and promoting the commercial release of Bt Brinjal during the period 2005-10 was in violation of the Biological Diversity Act of 2002. “None of the regulatory agencies, including NBA and Ministry of Environment and Forests, had bothered to verify compliance with the Act throughout this period and action must be taken against these violators,” ESG said.

ESG urges Karnataka CM to re-initiate prosecution
ESG has submitted a representation to Karnataka Chief Minister Sadananda Gowda urging him to immediately revive the decision to criminally prosecute those engaged in Bt brinjal bio-piracy through the state biodiversity board.

The board in its meeting on January 12 had decided that the subject falls under the purview of NBA and said that “the national authority will take necessary action against institutions/companies regarding alleged violations of provision of the biodiversity Act” (see 'Karnataka Biodiversity Board washes hands of Bt Brinjal bio-piracy case').

In its submission to the chief minister, ESG has said that the board had earlier decided to initiate appropriate legal action under the Act against UAS-Dharwad and Mahyco for accessing six local varieties of brinjal illegally from Karnataka, and converting them into transgenic brinjal. “However, due to pressure, apparently brought by none other than the principal secretary of Karnataka's Environment Department (the chief custodian of Karnataka's biodiversity), the investigation built over two years was suspended in a controversial decision of the board in January 2012,” alleged ESG. ESG had also started a petition—Karnataka Biodiversity Board must prosecute—in February, which has been endorsed by over 500 groups and individuals across the country.