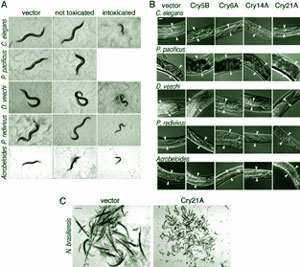 the world's most widely used organic insecticide -- the bacterium Bacillus thuringiensis or Bt -- requires help of other microbes to be effective, claims a new study. Without the help of the native bacteria that colonise the insect gut, Bt is unable to perform its lethal work, say researchers from the University of Wisconsin-Madison. The study appeared on September 26, 2006, on the online version of PNAS journal.

The new insight has significant implications not only for controlling insects in agriculture, forestry and human health, but also for understanding microbial disease in humans and other animals. "The take-home message is we have shown that the mechanism of killing for Bacillus thuringiensis is facilitated by the normal gut community," says Nichole Broderick, a graduate student and the lead author of the study.

Virtually all animals, including humans, depend on the interplay of numerous species of bacteria that routinely colonise the stomach and intestines. The caterpillars of moths and butterflies, for example, have 7-20 species of gut bacteria. Humans have 500-1,000 species of micro flora in the intestinal tract.

The Wisconsin study was conducted using antibiotics to clear all of the native bacteria that colonise the gut of gypsy moth caterpillars. Exposed to Bt, the caterpillars whose intestinal tracts had been cleared of their native microbial communities showed none of the agent's toxic effects. When the insect's microbial gut flora were re-established, Bt's insecticidal activity was restored.

To further test their results, the Wisconsin team used a strain of live E coli engineered to carry the Bt toxin to infect caterpillars, a lethal treatment whether or not the insect gut contained its normal complement of microbes. However, if the engineered E coli was killed before administration, it only killed those caterpillars whose microbial gut flora were intact. The exact role played by the microbes to promote the Bt toxin's lethal effects remains unknown.