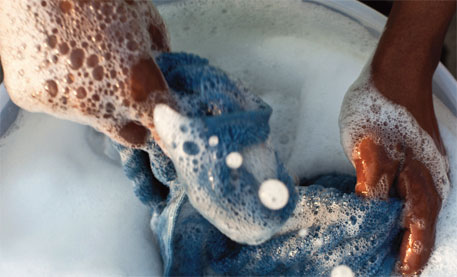 WHETHER IT’S the “whitest white” of Tide or “no more stains” of Surf Excel, detergent brands rely on enzymes for that extra clean look of clothes. Such detergents have cornered about half of the washing powder market in India. But use of enzymes increases the cost of washing clothes. For example, the cost of detergents containing enzymes like Surf Excel Automatic and Henko is two to five times that of non-enzymatic ones like Nirma and Wheel.

So, how does one get the best wash at minimal cost? Researchers say reusing the enzyme that is thrown away with the detergent after every wash could be the way out. Taking cue, researchers from Maharishi Dayanand University in Haryana, have found a technique to apply the enzyme to plastic products like buckets and brushes used to clean clothes. Thus, the enzyme in a spoonful of detergent used to wash one set of clothes could be stretched to 200 washes.

Enzymes—amylase, cellulase, protease and lipase—form nearly 10 per cent of the detergents’ mass. Proteases act on stains containing proteins like those of grass and blood. Amylases break down starch containing stains like those from sauces and ice-creams. Lipases remove oily stains and cellulases minimise colour loss from the cloth and keep it soft.

To immobilise the four enzymes on a plastic container and a brush, the team treated them with a mixture of nitric and sulphuric acid followed by glutaraldehyde solution. The enzyme solution was prepared by dissolving one milligramme of each enzyme in a buffer solution separately and then taking them in the ratio 20:60:1.3:1.28. The plastic was then incubated with this enzyme solution. The whole process took around 40 hours.

To test the efficacy of the enzymes, the researchers stained pieces of cloth with starch, grass, egg albumin and mustard oil. Both enzymatic and non-enzymatic detergents were dissolved in distilled water, canal water, groundwater and well water. Different water sources were taken to show that hardness of water does not matter while cleaning.

The residual stain was just 0.017 mg/cm2 when the modified container was used. The residual stain when enzymatic detergent was used was higher at 0.022 mg/cm2. The study was published recently in Industrial & Engineering Chemistry Research.

The research group has a patent on the technology and is trying to commercialise it. “We have signed an agreement with the National Research Development Corporation (NRDC) to commercialise the product,” says C S Pundir, the lead researcher. NRDC is a government agency involved in popularising indigenous technologies and earns royalty from them.

Pundir, though, accepts that the technology is yet to be tailored for everyday use. The plastic needs to be retreated with the enzyme after 200 washes. The coating cannot be done at home and has to be carried out at an industrial scale. Moreover, people using washing machines cannot use the product.

“We need to find answers. One way could be to use treated plastic sheet to line up the buckets and washing machines. The final technology would determine the cost,” he adds. Ashish Kumar Srivastava, scientific officer with NRDC, says the soap and detergent industry would definitely be interested in the technology. Srivastava reveals that the preliminary evaluation process for the technology is complete and the method has been cleared by an NRDC committee. Costing, demand and usability still need to be evaluated. “The formalities are likely to be completed by mid-May,” he adds.

Food, pharmaceutical and textile industries that use enzymes would also be interested in the technology. For example, the food industry could use coated container to reduce the amount of fibre in fruit juices, says Pundir.

The global enzyme industry is one of the fastest growing and is projected to reach US $3.74 billion by 2015, according to a US-based market intelligence company report.