No incentives for organic fertilizers and sustainable farming 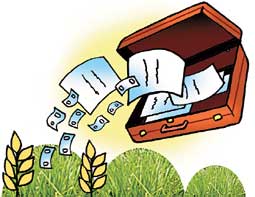 A closer scrutiny indicates the attempt to revive agriculture is half-hearted.

(Growth in the sector declined from 5.2 per cent in 2005-2006 to -0.2 per cent in 2009-2010.) For instance, the budget has allocated Rs 400 crore for extending the Green Revolution to eastern states of Bihar, Chhattisgarh, Jharkhand, Uttar Pradesh, West Bengal, Orissa and eastern Uttar Pradesh. “The amount allocated works out to less than Rs 100 per person,” said Praveen Jha, economic adviser with the Centre for Budget and Governance Accountability, a think tank in Delhi.

Some scientists said it is better that allocation for eastern states is low.

They reasoned it was excessive use of synthetic fertilizers and pesticides that drove the Green Revolution in Punjab and Haryana, and extending it to eastern states may harm soil health. They pointed out this year’s budget had to allocate Rs 200 crore for conservation farming to restore soil health, conserve water and preserve the biodiversity in Punjab and Haryana.

The finance minister also announced an outlay of Rs 300 crore for organizing 60,000 pulse and oil seed villages in rainfed areas. But a break-up of the budget shows each village would get just Rs 5 lakh, said Bhaskar Goswami of the non-profit Forum for Food and Biotechnology. He added the government did not have an action plan to implement the proposal. Ramajaneyulu said the proposed boost to pulses and oilseeds is not supported by market interventions like pricing. “The budget offers nothing to rainfed areas that have the maximum potential to make India food secure,” he said.


Credit not of much help

The budget has increased credit availability to farmers from Rs 325,000 crore to Rs 375,000 crore and has reduced interest rate on loans to five per cent from six per cent last year. Mechanisms like improving price fixed for farmers would have helped more, otherwise credit will increase indebtedness, said Ramajaneyulu.