With bacteria resistant to antibiotics 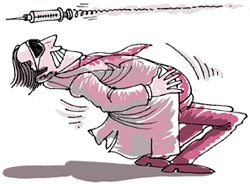 more than 40 per cent of bacteria found in meat on sale in Switzerland are resistant to at least one antibiotic, shows a research. The findings have grave implications -- the bacteria, campylobacter, are responsible for 14 per cent of annual diarrhoea diseases across the world. In Switzerland, one out of every 1,000 individuals suffers from campylobacter infection every year; the number is approximately ten times higher in the us.

The findings should cause concern among the Swiss consumers, but the picture for other countries may even be bleaker -- antibiotics are given to poultry in lesser quantities in Switzerland than other countries. During a study conducted in the us, 90 per cent of campylobacter strains isolated from poultry meat were found to be resistant to at least one antibiotic, and 45 per cent were resistant to at least two drugs.