Despite a host of reasons against its constuction, Pakistan decides to go ahead with building the Diamer dam 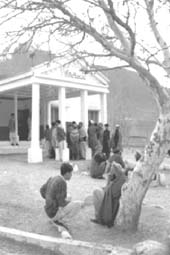 THERE are more reasons against than in favour of the Pakistan government's decision to build the Diamer dam in the Kohistan district of the north west frontier province (nwfp) along the Karakorum Highway (kh). Experts say that the dam will cause serious environmental damage to the entire region, besides being responsible for the relocation of thousands of people.

In 1984, the consultants for the project, Canada's Montreal Engineering Co estimated that some 13,600 people would have to be relocated. However, the local administration and the people of the area say the consultants have got the figures wrong. One reason they say is that the consultants' estimates are based on Population Census Data of 1981. A population growth rate of three per cent would make this figure cross 23,000.

However, the federal minister for water and power Gohar Ayub says that the dam is in the best interest of the country. "It will generate cheap hydro electricity which will bring prosperity to the nation and sustain its agriculture and food production in the next century," he says. But not many people agree with him. "The dam will have a negative impact on the agriculture and ecology," says Riyaz Ahmad, who recently led a three-member team to study the dam site for the Pakistan Network of Rivers, Dams and People.

Large areas of Punjab and the nwfp along the Indus banks have extensive tracts of land irrigated by the floods in the river. "The dam will adversely affect the water tables along the river up to the sea", says Ahmad. The reduced flows in the river will also disturb the flora and fauna.

Ecologically the region is unsuitable being devoid of vegetation which has resulted in heavy erosion in the catchment area of the Indus. The silt load in the Indus has changed substantially since 1982. Massive deforestation owing to extensive illegal logging in the Indus river watershed areas add to the problem of erosion and, consequently, the silt load in the river. Heavy deforestation has robbed the mountains of all natural cover and speeded up the erosion rate to an alarming rate.

A senior technical expert with the federal ministry for water and power in Islamabad says on condition of anonymity, "the dam has so many technical flaws it can never hope to be constructed. But the people behind the project are not interested in getting the dam constructed but to initiate the expensive process of feasibility studies that will cost around us $ 20 million. There is a lot of money to be made."